The Moon Has Set

This was the title of the case study of the 10th Frankfurt Investment Arbitration Moot Court. For its anniversary, the dispute between the protagonists happened at the same time as the first case study did. The famous Kleopatra VII, the Queen of Egypt, concluded two contracts with Herod, the King of Judaea. One was a bilateral investment agreement between Egypt and Judaea, the other was an agreement with which Kleopatra VII conferred land and rights to Herod. Kleopatra VII died shortly after due to a war between Egypt and Rome. 21 years later, her daughter Kleopatra Selene, Queen of Mauretania, advises her legal scholars to commence arbitration because of an alleged breach of the BIT between Egypt and Judaea and the agreement by Herod.

For our first step to prepare for the pleadings, we needed to write two written memoranda, one for the side of the claimant, Kleopatra Selene, and one for the side of the respondent, Herod. Therefore, we started to get ourselves an overview over the timeline and the people mentioned in the case study. Proceeding, we researched the nine issues that were given by the case study. In those issues, we discussed problems like the definition of an investment, the nationality of the claimant and the impartiality of an arbitrator. After many long days in the library and extensive meetings and discussions, we handed in the two memos at the turn of the year and received invaluable feedback from our coaches.

Subsequent our winter exams, we implemented the feedback and started to prepare ourselves for the oral rounds. We therefore sorted out our best arguments and practiced our pleadings. Because timing was an important issue, as the teams are expected to have an exact time management, we needed a clear and easy understandable structure. Thus, we sorted out interesting but too long and complicated argumentation lines. We not only had to practice our pleadings, but needed to be prepared to be interrupted by questions of the arbitrators.

In mid-February, our first pre-moot in Paris was around the corner. After the training sessions at Pestalozzi we felt well prepared and were excited to finally show our skills.

The Pre-Moot in Paris

On 19 February 2017, early Sunday morning, we took the TGV to Paris. After we arrived in our cozy Airbnb apartment close to Montparnasse, we spent the last hours on fine-tuning our pleadings. On the following day, the event took place at the impressive venue of the ICC in the middle of Paris.

In the preliminaries, there was just one round: We pleaded as Respondent against Moscow State University, the winner of the Moscow pre-moot. It was a tough round. Moscow State University was extraordinarily skilled. They adapted immediately to our structure, mentioned a substantive amount of case law and criticized our time management. However, we didn’t lose our train of thought and delivered a strong performance as well. In the end, both teams advanced to the quarter finals. 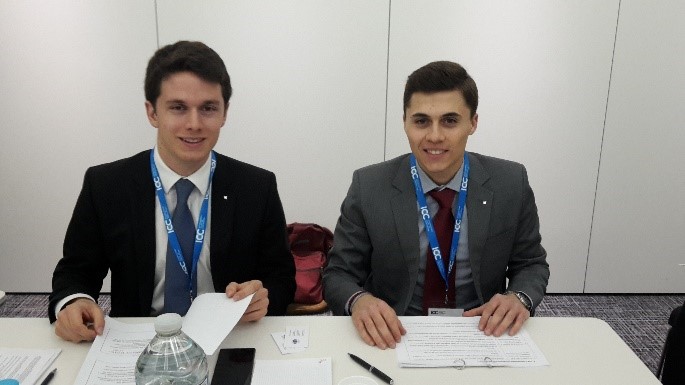 In the quarter finals we pleaded as Claimants against University of Luxembourg. The round was on a high and equal level. Due to time issues the semi-finals were cancelled. Neither Luxembourg nor we made it to the final round.

In the evening, we had the opportunity to get to know the other teams at a cocktail reception organized by Shearman & Sterling LLP. 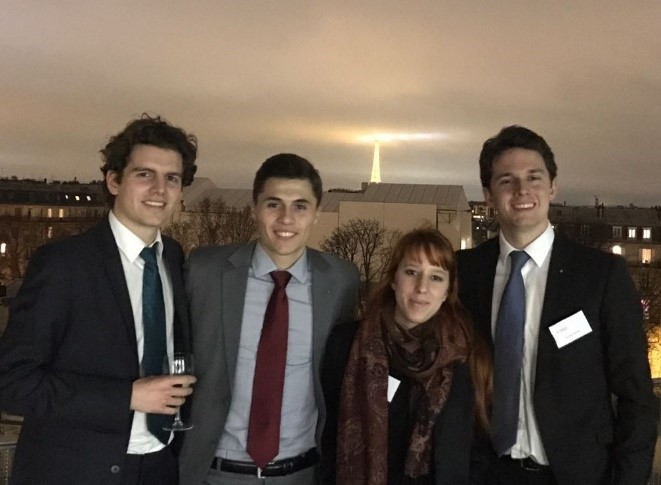 Over all, the experience in Paris was very valuable. We got a first impression on how the final moot in Frankfurt was going to be. Moreover, the pre-moot clearly showed us where we had to improve.

The Pre-Moot in Stockholm

Only two days after returning to St. Gallen from Paris, we left to travel up north, destination Stockholm. The schedule of the first day started in the afternoon, which allowed us to take the morning off and we got to see a little bit of the city. We then attended the conference at the Stockholm Chamber of Commerce on Friday afternoon. Following the conference, all the teams and the speakers transferred to the offices of Mannheimer Swartling for a cocktail reception. The location on the 12th floor, including a terrace and a beautiful view over Stockholm, gave a first impression of what was awaiting us the next day. On Saturday, eight teams participated in the pre-moot event, which was held at Mannheimer Swartling. The firm reserved a whole floor for the moot, providing each team with a private preparation room for the day. In general, Mannheimer Swartling has been very generous and organized a memorable event altogether. 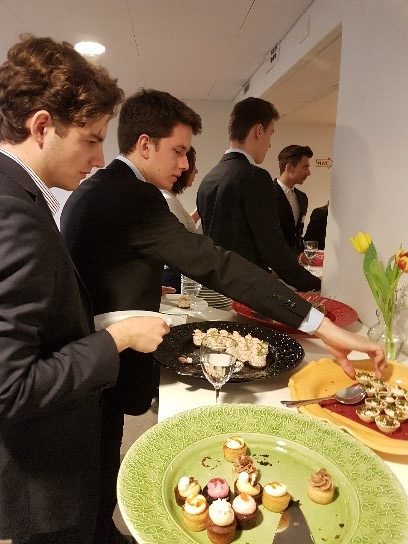 We started the morning as Respondent against Uppsala University. The presiding arbitrator in this pleading was very active and threw both teams off their structure pretty well. This was certainly a new experience for us, however very beneficial as it taught us how to adjust more spontaneously and still handle the time. For our second round, we then faced Moscow University as Claimant, a déjà-vu after our first encounter in Paris. We were able to present our arguments in a good structure and had a solid performance. However, in the end, the points were not enough to advance to the final four. We then used the final rounds in the afternoon to listen to the other teams, which was very beneficial as well, as it gave us a much broader impression of different pleading styles.

After the final round, all the teams and some of the arbitrators then went to have dinner together and later finished the evening at a club. The well-organized social program allowed us to mingle with the other teams, creating friendships that later continued in Frankfurt. Overall, the Stockholm pre-moot was a great experience, in both competition and social regards. We can nothing but recommend the participation to future teams. 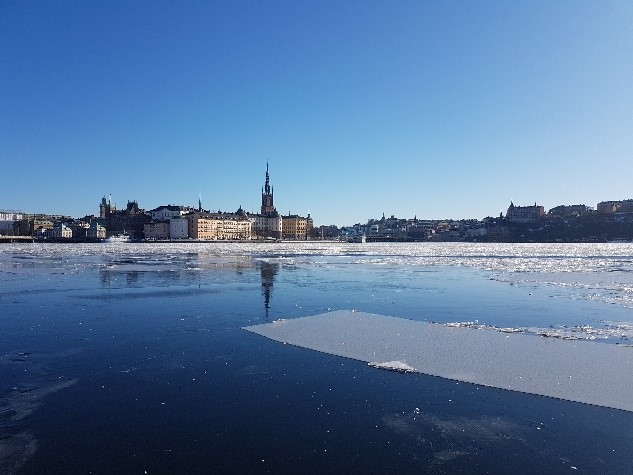 The Final of the Frankfurt Investment Arbitration Moot Court

Finally, it was time for us to go to the much-anticipated final event in Frankfurt (Main). We arrived there Monday morning and while some of us still used the afternoon to prepare for the following days, the others went to the opening conference which concluded in the announcements of the group match-ups. We learned that we had to face off against the West Bengal National University of Juridical Sciences Kolkata, India and the Eugene Dupuch Law School Nassau, Bahamas on Tuesday morning. On Wednesday morning, we were scheduled to plead against the University of Amsterdam.

Although we were quite convinced of our arguments, some of the arbitrators managed to throw us off at times, which presented us with the difficulty of adjusted time-management and left us with no choice but to constantly restructure our pleadings. Our coaches, who accompanied us during all our pleadings, were of great help here, giving us valuable feedback after every session, which allowed us to get better and to make a more confident appearance during the next pleading.

Unfortunately, a win, a draw and a loss was not enough for us to advance to the round of sixteen. After shaking off the initial disappointment we decided to make the most of remaining events and to use the opportunity to get to know some of the teams and to socialise. At this point it has to be noted, that the Frankfurt event was very well organised and that it offered many different settings for the participants to acquaint, not only with one another but also with the arbitrators.

All in all, weare extremely happy that we had the chance to participate in such a great event. Preparing for the pre-moots as well as the main event certainly was a big strain, but it also allowed us to test and work on our presentation and argumentations skills, which we will undoubtedly profit from in our future careers. Future participants might want to focus already at a very early stage, on how they are going to present their arguments and work on being as flexible as possible with regards to structure. If we can say one thing with certainty, it is that you will not be able to present your arguments, the same way you planned to. 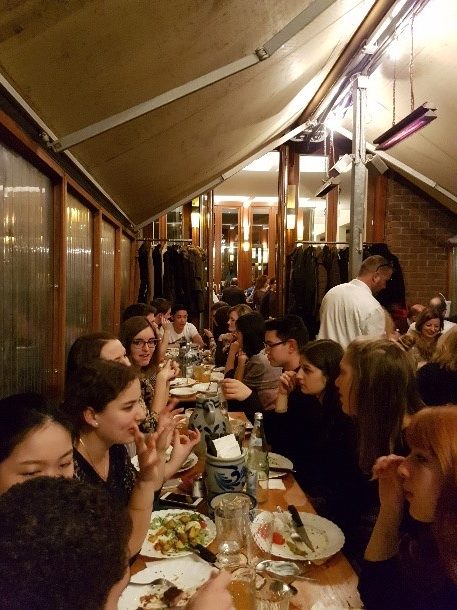 It should also be mentioned that the moot court is most and foremost a team event. Team work is not only crucial during preparations and when organising the event but also during the pleadings. We have relied greatly upon each other at different times during these past six months, which was only possible because we learned to trust in the capabilities of the each other.

We would like to thank our sponsors, Pestalozzi, WilmerHale, the University of St. Gallen as well as Novum Group for making it possible for us the compete in Paris, Stockholm and Frankfurt. We would also like to thank Jannick Koller, Nadine Bosshard und Lorenzo Baldassarre for taking the time to listen to our pleadings prior the pre-moots and also for their valuable feedback, tips and insights with regards to the main event.

Most importantly, we would like to especially thank our coaches, Prof. Dr. Anne van Aaken, Lukas Rusch and Gentiana Imeri, for all the time and effort they invested in preparing us for Frankfurt. 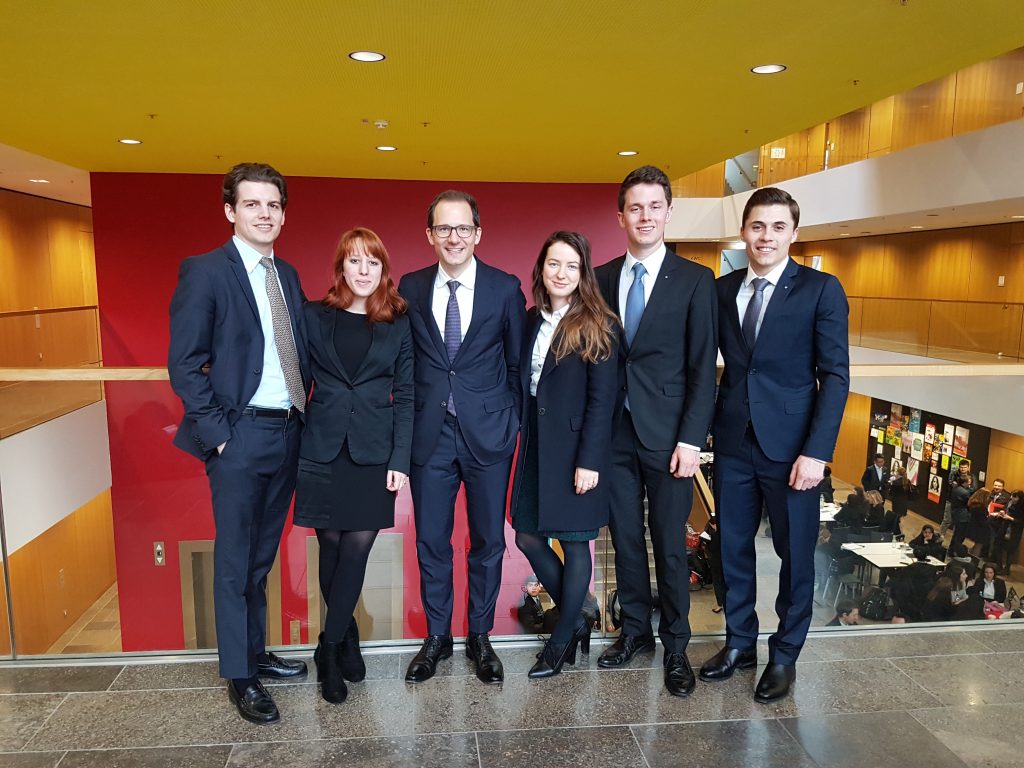